In my previous post I explored one of the smallest and oldest glass plate negatives in our archive to show it has resolution at least 2000PPI (or 40 line pairs per millimeter, lp/mm) which correspond to 80-90 megapixel photograph. This noticeably exceeds the published estimates of resolution of historic film.

This time I take a detailed look on one of largest negatives in our collection - a monster plate 30x40cm. The photograph was taken by my great-great-grandfather and/or great-grandfather in 1903 documenting the construction of the first electric railway in the Austro-Hungarian empire by František Křižík ("Czech Edison"). This unique event was recorded in a series of photographs prepared by the best technology available to a photographer of Czech countryside. While the glass plate I am going to speak about may be considered one of the more boring in the series it shows some extra-ordinary detail.


The picture is not exactly pixel sharp, but still looks good even on computer screen that is about 70-100DPI, that is 19 times enlargement. At this size the full image would be 6 meters wide.
This portion of image resembles the accidental version of line test target used to measure the resolution of film: 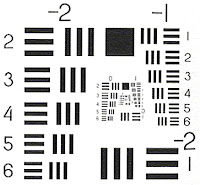 To determine resolving power of the negative one takes a contact copy of this target and looks for smallest triple of lines which can be still distinguished apart in the result.

In my scan, clearly the poles in fence are distinguishable, while in 1000PPI scan they gets barely distinguishable (despite my effort to improve rendering by digital sharpening) and in 800PPI scan they can be counted only in the bottom left region of the image. It is also easy to count that there are 10 poles in 0.58mm which yields to 17lp/mm and corresponding digital resolution 17*25.4*2=863PPI.

Poles are just poor replacement for high-contrast testing target and thus I think I am safe to claim that the resolution of this particular photograph exceeds 1000PPI, or 180megapixel! Clearly my great-grandfather could score even better with his setup if he decided to capture the line target in optimal conditions. Unlike my earlier example, this photograph is sharp from edge to edge and thus we speak of real equivalent of 180megapixel photograph.

To be sure that the resolution of 1900PPI is good enough I re-scanned the central portion of photograph in 5588PPI:
The scan shows very pronounced film grain because the negative is over-exposed. It is interesting to compare this scan with my 1900PPI scan:
This clearly shows how real world scans on a given resolution are softer and less resolving compared high resolution scans scaled down to a given size.

Estimating using T.J. Vitale's method, summarized in my previous post, the resolution of the negative could be 2000PPI and the loss of resolving power for large format lenses about 40-60%. This yields to resolution 800-1200PPI which meets my estimates. There is however one aspect to discuss.

T. J. Vitale considers large format lenses for negatives 4x5" to 8x10". This negative is about 2-4 times as large in both dimensions and the resolving power drops quickly with size of the negative lens is constructed for.

How resolving was the lens used to take this photograph? The resolution of lens+negative combination can be estimated using Resolution Power Equation (RPE), which Vitale takes from the  FujiFilm Data Guide (p102, 1998):

Knowing the estimated resolution of system and media it is easy to obtain resolution of lens. Assuming the glass plate negative resolved 60lp/mm (3048PPI) which is the first available data for 1940s, the lens should resolve at least 30lp/mm. By Vitale's estimate of 2000PPI negative, the lens should be even more resolving, 35-45lp/mm. Now scale this to 35mm film equivalent and you would need 30*40/3.5=342lp/mm lens!

This suggest a question. How hard it would be to obtain the same resolution 103 years later with digital technology?

By no means I could be considered expert on high end cameras and I would welcome any comments on this topic. Apparently there are two recent one-shot camera backs with sensors over 100 megapixels. Hasselblad H5D-200ms and Phase One XF both selling for about $45000-$48000.

Hasselblad has 50 megapixel sensor but it has ability to move the sensor and take 6 shots which combine into a 200 megapixel photograph. 6 shots are necessary for true 200 megapixel image instead of 4 one would expect because of the property of digital sensors - they capture only one color in each pixel through the Bayer's filter and the rest of color information is interpolated:
While the picture contains some moving water but I suppose given short enough exposure it should be possible to take it by this camera.

Phase One XF is true one shot camera and thus the 100 megapixels really corresponds to about 50 megapixel black and white image.

To take a quality image, one needs quality lens. The sensor size in Hasselblad is 36.7 x 49.1mm CCD with resolution 6132 x 8176 pixels. The 200 megapixel image will be 16352 pixels wide and the lens should resolve at least 166lp/mm. One of recommended lenses for this camera is Apo-Digitar by Schneider Optics which apparently could take 90 to 200 line pairs by millimeter. Such lens sells for approx. $2700.

Sadly I can not really find full resolution samples from Hasselblad. Here are some samples from the Phase One XF camera.

Taking digital photographs of historic negatives by a high-end camera rather than using a dedicated scanners is a technique of digitizing historic negatives which is getting increasingly popular (given the demise of film photography and thus high-end scanners it may soon become the only option). The satisfactory scan of the negative presented here should reach at least double of the resolution in each dimension, or 600-800 megapixels. This seems out of reach of one-shot cameras today.

One option is to take multiple photographs and stitch images together. This can be done, for example, by film scanning kit developed by Digital Transitions specifically for needs of museums and archives. This is one of fancier kits on the market. Moreover many photographers built a similar (simpler) setups by hand.

In addition to large resolution also high dynamic range and very precise rendering of half-tones (and thus stable backlit and great lens) is necessary for a good capture of historical negative. While printing the photographs photographers of 19th century used soft papers and techniques to reduce the dynamic range to beautiful prints. Doing an equivalent in photoshop is possible, but it tends to reveal previously invisible stitching artifacts as well as digital sensor noise. In fact, in the scan presented here you can clearly see a strip in the sky in about 1/4th of the image. It is not defect of the original negative. It is stitching artifact. I worked hard over a year to get rid of it.

George Eastman house used custom built scanner based on a microscope to produce 140,000 megapixel scans of daguerrotypes. The stitching artifacts shows clearly though.

To bypass the limitations of one-shot sensors, it is possible to use scanning back which features moving line sensor. Time needed for a shot is larger and such camera can not be used to take photograph of moving subjects, but it is perfectly fine for scanning. For example, Pentacon Scan 7000 seems to be able to scan 20000x20000 pixels or 400 megapixel camera and the trilinear sensors can scan all three colors in every pixel. Curiously enough I can not find price of this beast. I saw custom Cruse scanner of similar built and while it is capable of great scans it is even more expensive than the Hasselblad camera discussed. Another manufacturer of scanning backs, Better Light, provides some sample images. Again those backs are not cheap and require expensive camera body and lens.
Being a private organization, at Šechtl and Voseček museum of photography we can not afford such expensive cameras, but we still need a quality scans. I will write about the way we scan negatives next.
Posted by Honza Hubička at 2:05 AM